The Honour: ‘Ever since you assumed the position of the Commissioner of Insurance and Chief Executive Officer of the National Insurance Commission…your achievements, key among which is the introduction of the Motor Insurance Database (MID) to checkmate fake motor insurance in Ghana cannot go unnoticed. Your institution of an Insurance Education Fund to build capacity of the industry and educate the insuring public to see the value in insuring their lives and property are phenomenal. The GJA hereby confers on you: ‘HONORARY MEMBER OF THE GJA’.

These are the words as contained in the citation that accompanied the decoration of Mr. Justice Ofori, Commissioner of Insurance at the recently held 25th GJA Awards.

Life has an interesting way of dealing with us as humans. Things happen; plans do change; mistakes are made and corrected and events unfold. To mitigate the consequences of these occurrences, the concept of insurance was developed.

His entry into the insurance profession was somehow accidental. After his last paper at the country’s premier University, University of Ghana, he had the opportunity to sojourn in Canada for a reasonably long while. It was during this period that he decided to study courses in Banking and Insurance – a career identified!

From 1990 to 2004, Mr. Ofori held various positions at McLarens Toplis in Canada, Allianz Canada and CGI Canada as a Licensed Independent Claims Adjuster. He has over 28 years of experience in Insurance with almost 4 of this being the Regulator.

Driven by the desire to return to help his country, Mr. Ofori returned to Ghana in 2004 and decided to have a practical stint with the local insurance industry.

His first local employment was with Vanguard Assurance where the then Managing Director, Mr. Emmanuel Mahama Baba gave him the opportunity as the Senior Manager in charge of the Corporate Department and he did not disappoint. This thus, led to his appointment as the first and the longest serving Director of the Ghana Insurance College (GIC) before His Excellency the President of the Republic of Ghana, Nana Addo Dankwa Akuffo Addo appointed him as the Commissioner of Insurance.

Mr. Ofori has indeed justified the confidence reposed in him by the President! He could best be described as a process and a business-minded personality blessed with organisational and results-oriented acumen.

As the leader of the National Insurance Commission (NIC) which oversees operations of all insurance entities in Ghana, he turned around the business-as-usual phase of the Industry to that of a revived one that keeps everyone on his or her toes.

There is no time wasted on implementation strategies as he believes in his personal mantra: ‘Anything conceived to be done at all must be done now’.
The leadership skills in him was discovered as a young hockey-player in his days at the secondary school where he earned the nickname: ‘Konkoronkor’ due to his leadership skills on the field of play.

To suit his physical attributes and drive, he earned the name ‘Ammunition’ at the Vandal City. He believes there is only one university in the world – ‘the University of Commonwealth Hall’.

With high hopes of changing the not-so-encouraging trend in the awareness creation bit of the industry, he championed and continues to do so in providing basic insurance education to all categories of people.

The launch of the Basic Insurance Education with the Ghana Education Service (GES) has been one of his dreams crystalizing as he believes that when people understand [during their formative ages] the importance of insurance rather than the compulsion to purchase insurance, uptake becomes a norm! This collaboration is expected to result in the introduction of insurance as a basic course of study at the second cycle institutions.

‘If media personnel get it right, then the people would get the message’ is his firm conviction. With this in mind and through his leadership, the NIC got closer to the media fraternity as it provided a series of training programmes for journalists in Ghana on the basics of insurance. This was with the view to creating awareness and also ensure that media reportage is in its rightful place with journalists having a firm understanding of the business of insurance.

Mr. Ofori has done a lot and continues to do so for the development and growth of the insurance industry by way of policy formulation, project initiatives and implementation as well as training and manpower development.

Employment Creation for the youth

The training of 10,000 Youth as Insurance Agents is part of the awareness creation and employment creation strategy which will go a long way to propel the growth of the industry as well as create employment for the youth.

Introduction of the Motor Insurance Database to the world

The introduction of the Motor Insurance Database (MID) to checkmate fake motor insurances gives the assurance to the general public that the insurance on their vehicles have valid insurance. This is perhaps the biggest game-changer in the insurance industry in any country as it is the first of its kind not only in Africa but in the world to have certain unique features as in instant SMS upon the purchase of insurance.

Mr. Ofori who believes that the progress of the insurance industry is hinged on conscious and consistent manpower development. Within a decade, he superintended the training of over 300 insurance professionals who attained the ACII status at the time he was the Director of the Ghana Insurance College. “Iron sharpeneth iron”, he believes.

It is little wonder many a practitioner and a past student under his tutelage calls him the Insurance Schwarzenegger. This apt description may not only be because of his physical and mental toughness but his passion for manpower needs and development in any field.

The NIC now recognizes qualifications in insurance obtained from the Ghana Insurance College (GIC) for the chartered insurer status. With this credential, an insurance practitioner can hold Principal Officer positions such as Chief Executive Officer or Chief Operating Officer which was previously the preserve of the Chartered Insurance Institute CII UK or Chartered Insurance Professionals, CIP (Canada).

He has spearheaded the construction of an ultra-modern structure and permanent ultra-modern-state-of-the-art campus for the GIC at Dodowa as the College’s current Governing Council Chairman.

He also serves on the Board of the National Health Insurance Authority (NHIA). As a Member of the West African Insurance Institute (WAII) Governing Board, Mr. Ofori is also an Executive Member of the ECOWAS Brown Card Council of Bureaux.

Through his leadership and support of the Board of Directors, the NIC’s Insurance Education Fund instituted to build the capacity of the industry and educate the insuring public has made it possible since 2018 to have a minimum of eight (8) mainly residential capacity-building programmes organized annually.

This is done for all levels of the industry personnel including Directors and Shareholders, Principal Officers and middle level Management Staff of Insurance entities.

It is gratifying to know that through his leadership, the NIC has implemented the International Public Sector Accounting Standards (IPSAS). The Commission’s 2019 financial statements are therefore fully compliant with the IPSAS. This makes the NIC one of the few state agencies to have blazed the trail globally ahead of the set deadline for compliance with IPSAS’ international best practices.

The Commission has strengthened its close cordial working relationship with key stakeholder agencies including the Driver and Vehicle Licensing Authority (DVLA), the Ghana National Fire Service (GNFS) and the Motor Traffic and Transport Department (MTTD) of the Ghana Police Service, National Road Safety Authority (NRSA), the Ghana Private Road Transport Union (GPRTU) etc. Each of these organisations is helping to uphold the NIC’s mission of increasing public confidence in insurance in diverse ways under their various jurisdictions.

In order to improve its presence nationwide, and bring the policy holder protection services to the doorsteps of all the people in all parts of the country, the Commission has created three (3) additional Regional Offices bringing the total number of regional offices to seven (7). These are the Koforidua, Cape Coast and the Sunyani Regional Offices.

The NIC’s relationships with donor agencies such as the German Development Corporation (GIZ) and Alliance for a Green Revolution in Africa (AGRA) continue to yield the needed results with their continuous support to the financial inclusion agenda.

Mr. Ofori holds a Bachelor of Arts degree from the University of Ghana, Legon and a Diploma with Honours in Banking and Finance from the Toronto School of Business, Canada. He also possesses 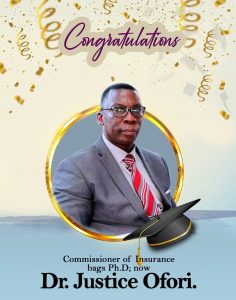 degrees from the York University, Canada and the University of Toronto, Canada. He is certified in Management (CIM) by the Canadian Institute of Management and is a licensed Independent Adjuster, Ontario – Canada.

The future of Ghana’s Insurance industry

With insurance uptake coverage over 30% of the country’s population, he believes a lot more work needs to be done.

For him, insurance is tied to the economic growth of Ghana. He explained that insurance needs to be brought to the doorstep of many low income earners and educating them on its benefits as this would serve their immediate and future needs.

As the Regulator of the Insurance industry in Ghana, Mr. Ofori indicated that complaints about some attitudes of certain insurance companies towards their clients will not be left unattended as the Commission has a core mandate to protect the interest of policyholders.

Apart from his love for insurance, he lives the saying: ‘a healthy mind thrives better in a healthy body’. For him: “I feel guilty any time I fail to exercise”.