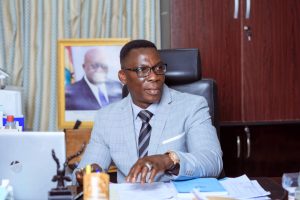 Dr. Justice Yaw Ofori, Ghana’s Commissioner of Insurance, has been inducted into the Oxford Academic Union of the United Kingdom (UK).
The Chief Executive Officer of the National Insurance Commission (NIC) was among a few accomplished and high-profile individuals globally, with diverse specializations, recognized and inducted and presented with an induction certificate. His illustrious career as a professional insurer of many years standing, coupled with his stellar performance as Ghana’s leader of Insurance regulation did not escape the lenses of the Oxford Academic Union. In Ghana, he has been largely hailed for aggressively driving innovative transformation of the insurance landscape through disruptive high technologies to enhance business processes and aide insurance growth in Ghana. This, among other key considerations led to his selection from amongst several other nominees across the world for the rare honour.
For instance, Dr. Ofori, who previously served as Director of the Ghana Insurance College (GIC) for more than a decade, has led the NIC to implement several bold transformational initiatives including deepening insurance education in Ghana and the introduction of the celebrated Motor Insurance Database (MID), which most industry pundits have referred to as arguably the most significant innovative intervention in Ghana’s insurance landscape and in the world.

By his induction, Dr. Ofori is now a member of the Academic Union Speakers Bureau, and in the league of a privileged few to use the Academic Lounge in Oxford. He will also be expected to speak at various Academic Union scientific events and Academic Union meetings, to share his expertise and deep insights on a wide range of topical issues.

Following this recent declaration by the European Business Assembly, Dr. Ofori, who was visibly overwhelmed by the recognition, expressed his profound gratitude to the Oxford Academic Union. He reckons this recognition would enhance the growing spotlight and key developments in the insurance landscape in Ghana and beyond. An elated Dr. Ofori is also quoted as saying “This recognition which is symbolic of credit and expression of appreciation to people who promote social and intellectual progress of modern society, though came to me as a surprise, makes me feel the desire to strive harder for greater feats for my country.”
It will be recalled that through his exemplary leadership and managerial acumen, the Ghana Journalists Association (GJA), conferred on him an honorary Member of the Association during its 25th Awards particularly in recognition of his contribution to insurance education in the country and for his lead role in the introduction of the MID.
The Academic Union is an international Oxford-based association of over 300 Universities, Chancellors, scientists and researcher coming from over 40 countries. The Union pursues the ideals of excellence, innovation and accessibility. The primary aim of the union is to join the efforts of scientists, academics and business to develop a unique teaching methods and education of the universities of the future and these are expected to meet the challenges posed by the 21st century.
Some time last year, Dr. Ofori was awarded the coveted Overall Best CEO of the year 2021 by the Ghana Leadership Awards!
He picked an award on behalf of Ghana’s Insurance Industry for leading the Industry personnel to donate the highest number of units of blood to save lives, a demonstration of his desire for community service. He instituted the Ghana Insurance Industry Blood Donation Month (August) and recently launched the 2022 edition of such corporate social responsibility.