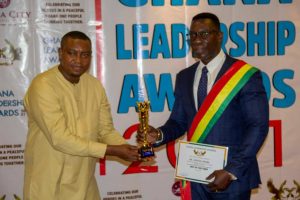 At a ceremony at the Accra City Hotel over the weekend organised by the Ghana Leadership Awards, the Leader of Insurance Regulation and Supervision in Ghana was awarded the Overall Best CEO for the year 2021.

There were 19 other Awards of the night presented to distinguished personalities in business, entrepreneurship, civil service, local governance, etc.

Dr. Ofori who picked up a plaque and a certificate as the ultimate winner expressed shock as to how it happened.

As far as he was concerned, he was just a Nominee and did not expect to come out tops.

He dedicated the Award to the Board, Management, and Staff of the NIC as well as the Insurance Industry as a whole.

This award comes swiftly on the heels of a few other laurels he had won within a week. The West Africa Nobles Forum (WANF) presented him with an award for upholding the virtues of Integrity, Honesty and Accountability upon becoming the Commissioner of Insurance on November 26, 2021.

Dr. Ofori was again adjudged by the National Blood Service as the Overall Best Corporate Blood Donor for 2021 for his role in leading the entire insurance industry to donate 802 units of blood to save lives in the various blood banks across the country. 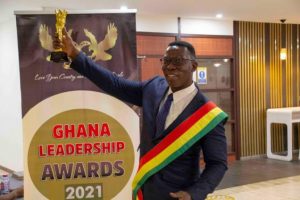 Dr. Ofori has recently declared the month of August as Ghana insurance industry blood donation month, a Corporate Social Responsibility gesture by the insurance industry that will help in restocking the country’s blood banks to save lives.

He has been largely touted as a transformational leader who brought a lot of changes in the insurance space.

Key among his achievements is the introduction of the Motor Insurance Database (MID) which has largely led to a significant reduction in fake motor insurances and vehicles dangerously plying our roads without insurance.

The CEO of the Year expressed gratitude to the entire insurance industry for their cooperation and hardwork that culminated in these awards.

“It means we are doing something right and must do more”, he told the media in a post awards interaction. He also used the opportunity to encourage especially the youth to keep moving in the right direction and in honesty as “whatever you are doing, someone is watching,” he said.