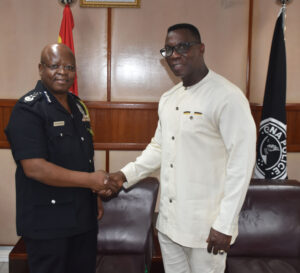 The Inspector-General of Police (IGP) has commended the National Insurance Commission (NIC) on its bold implementation of the Motor Insurance Database (MID). The objective of the MID is to curb the phenomenon of vehicles with fake motor insurance stickers plying our roads, thus endangering lives and property. He made these is remarks when the top Management of the NIC led by the Commissioner of Insurance, Mr. Justice Yaw Ofori paid a courtesy call on him at the Police Headquarters. Also present at the meeting was the Director-General of the Motor Traffic & Transport Division (MTTD) of the Ghana Police Service, COP Mrs. Beatrice Vib-Sanziri.

In his remarks, the IGP stated that this initiative was long overdue and could not have come at a better time. He bemoaned the carnage on our roads being recorded at such alarming rate barely a few days into the new year as worrisome. IGP Oppong-Boanuh further called on the NIC to expedite action on the training of the Officers, Police Officers of the MTTD on the MID across the Country for a more effective and successful implementation.

In his remarks, the Commissioner of Insurance, Mr Justice Ofori commended the Police for being a key stakeholder in the motor insurance space as regards enforcement without which the industry would have suffered a huge setback. Mr Ofori assured the IGP and for that matter the Police Service of the insurance Industry’s unrelenting support towards an enhanced collaboration.

“The NIC will collaborate with the MTTD as they conduct random checks across the lengths and breadths of the country to rid our roads of uninsured vehicles with fake insurance stickers”, the Commissioner intimated.

It is instructive to note that the number of uninsured vehicles on our roads are not easily detectable by the Police and this has caused many lives and property – a situation that warranted the development and ultimate implementation of this database.
It is expected that this will provide the much needed vehicle for increased insurance penetration in the country; thus, contributing to real economic growth.

It would be recalled that the Vice-President of the Republic of Ghana, His Excellency Alhaji Dr. Mahamudu Bawumia made a formal declaration on this all-important digital database in December 2019 and its swift implementation by the NIC is a demonstration of the Regulator’s resolve to ensure consumer protection and prudent solvency of the insurance sector as stipulated in the Article 2 (3) of the Insurance Act 2006 (Act 724) and plugging the loopholes couldn’t have been this timely.
Present at the meeting were other top Officials of the Ghana Police Service and the NIC.